Graphology analyzes all types of graphic productions such as drawings, doodles and texts. Writing manifests the personality of the writer. Through the description of the graphics, it is possible to identify deep personal traits of an individual. It is possible to obtain information on their intellectual capacity, work aptitudes, study conditions, and other more intimate peculiarities.

Emotional Stability: Where it Shows up in Your Handwriting

The hand writes because the brain decides it. Writing is a neuro-psycho-biological act: The brain sends information through nerve pathways to the muscles of the hand so that it can execute graphic movements. The slightest alteration in this route will be reflected in the writing.

How Does Writing Affect Your Brain

There is a very intimate relationship between writing and neuroscience. Who writes? The hand or the brain?

There is no mind without a brain. The brain is an organ and the functioning of the mind lives in the brain. The lines that are reflected on the written page are the manifestation of the mind and the brain. Psychic activity is linked to the functioning of the brain. Today it is known that the synapse of neurons is not just an electrical process, but it is also chemical. Neurotransmitters are involved, which are chemical compounds that conduct information related to emotions. The brain sends information through the neurons with a chemical and electrical message so that the hand executes the movement and materializes on paper. Writing reflects everything that happens in the writer’s brain.

The act of writing is the result of the functioning of certain areas of the brain, in which processes related to movement, the intellectual and the emotional, are combined.

Emotions and Feelings in Handwriting

Thoughts influence the type of behavior in people. The thoughts become something material and concrete: It is proven that writing shows and reflects it. It is a product of what happens in the brain.

From thoughts, certain chemicals are generated that provoke feelings and emotions. These, in turn, impact the body, generating new thoughts. Thus, a closed circuit is established, which is intensified, for better or for worse. Each thought produces a chemical reaction that corresponds to an emotion in the body.

How to see Feelings and Emotions in Handwriting

Let’s explain this in a simple way. When we have pleasant, happy, optimistic thoughts, the brain produces chemical compounds such as endorphins, dopamine, among others. They are substances that cause us feelings of joy and happiness. These chemicals also influence writing and can lead us, for example, to write in an ascending line, open ovals, long writing, the ends of letters to the right and up, among other features.

When we have negative thoughts, such as anger, disgust, they produce other substances such as neuropeptides. The body reacts with feelings of hatred, anger, annoyance. Those chemicals affect writing. As a result, the ovals are closed, the gesture is compressed, the line is pushed down, the final strokes are repressed, they go down or to the left, among others.

What your Handwriting Says about You

Given the mistrust of many people regarding graphology, the best explanation is to show them that when writing, the one who does the writing is the brain.

Nobody doubts the result that a neurologist gives to an electroencephalogram. Why doubt writing if it is such a complete cerebral manifestation?

An Introduction to Graphology

Graphology attributes a special meaning to the shape of the letters. What is “shape” in graphology? It refers to the configuration and structure that are given to the letters.

The shape of writing in an evolved and healthy person should be: Simple or simplified, rounded, typographic, it can be angular but always with harmonic strokes.

The Psychology of Handwriting

From the psychological point of view, the shape of the writing reflects the ability to adapt, behavior and character. It allows to detect the level of culture of a person, the level of sociability, the capacity of delivery towards others.

Our emotions and feelings are reflected in each of our actions. The way we speak, walk, or the way we use our hands can reveal how we feel. Even if we observe from a distance, we can tell if someone is excited or angry through their body language.

We have learned to hide our true feelings and therefore these physical signs alone they usually do not transmit enough. The voice and actions can be misleading and the spoken word can be manipulated in many ways.

Is it possible to know the true feelings of others?

Handwriting reflects the emotions of the human personality. In the act of writing, many spontaneous movements are made which are recorded on paper and reflect a variety of emotions. They are like an open window through which we can know the personality of those around us.

Writing is directly related to our thought process. You are particularly sensitive to emotions such as sadness or excitement. When we write, we transfer our feelings to paper and the words reflect these emotions.

Your handwriting is as incredibly sensitive as an emotional barometer. Excitement, fear, anxiety, irritability, or anger can be clearly detected. This evidence of emotion in writing is genuine. It cannot be faked. It remains visible for all to see.

Graphology is a valuable tool. It can make great contributions to all the sciences that deal with understanding the human being. The secret is to know the link between the signs of writing and their psychological interpretation. It allows discovering the functioning of the nervous system, the conscious and unconscious processes of the behaviors reflected on paper.

Psychology studies human behaviors and infers the type of personality of the subject studied. The way of writing is a behavior.

What your Handwriting says about your Health

If you write when you feel nervous, that feeling of anxiety will express itself as an almost imperceptible tremor in the strokes of certain letters. It may not be easily noticeable to the naked eye (although it sometimes is), but it will certainly show up if you look closely with a magnifying glass.

Your writing is the way to externalize the vibrant activity that takes place within you. It is like a mental photograph of your internal processes. Small quick movements reflect the vibration of inner activity. Round and smooth movements show a feeling of relaxation and calm.

Graphology: What is Lapsus Calami?

Emotional graphology is the branch that studies scriptural accidents that happen in graphism. Curt A. Honroth with the phrase “The mind doubts, the hand shakes” defined the parallelism found between Sigmund Freud‘s slip of the tongue and the faux pas in writing. He called them lapsus calami.

Curt A. Honroth was born in Hanover, Germany in 1898. He published two works: “Children’s Writing” and “Graphology, Theory and Practice.” Meanwhile Honroth had personally discovered the laws of emotionality in writing. Having found the parallel between the “lapsus calami” and the well-known “lapsus linguae” of Freud, he managed to show that the failed scriptural act integrated, together with the Freudian slips in conversation, a psychophysical whole. Both show some kind of conflict between conscious and unconscious desires.

What Do the Mistakes made in Handwriting Hide?

The presence of erasures is also worthy of being analyzed. Consideration should be given to the context in which they appear and the pressure applied when striking out. The type of erasure is linked to the way in which the subject reacts to a conflict or error.

This theory is based on what Honroth called “reflex words.” They are those that show a great graphic difference with respect to other words in the text, and may be larger or smaller than the rest of the writing.

How to Analyze Zones of Handwriting

Each of these five areas of writing has a meaning. When there is balance between them and none stands out above the others there is harmony in the text. It means that this person controls her moods, is disciplined and has emotional stability.

Inductive graphology studies some letters of our alphabet. It selects for analysis only those letters that, due to their structure and location within the graphic space, reflect the most interesting characteristics of the personality. They are called “reflex letters” because they mark trends in behavior, physical or emotional states of the writer.

It is important to remember that people are not “pigeonholed” according to how they draw these letters, the Graphological study of personality is comprehensive, and must be carried out considering a context. This is a simple initial approach. We do not study the entire alphabet, only those letters that offer us more information.

Important: You can analyze one item at a time to study, but in order to get a correct interpretation you have to analyze the entire writing sample as a whole before reaching a conclusion. 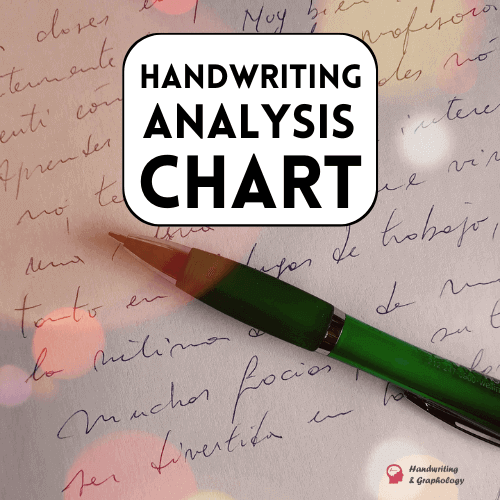 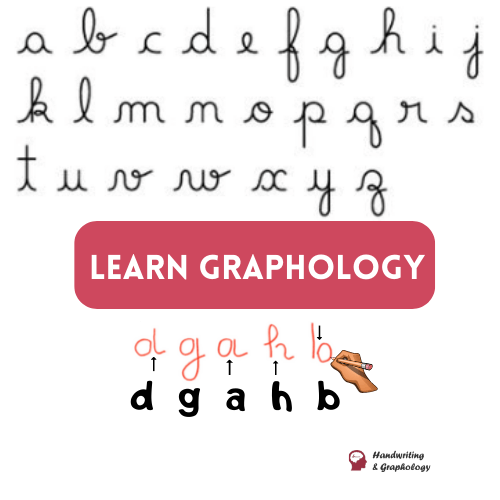 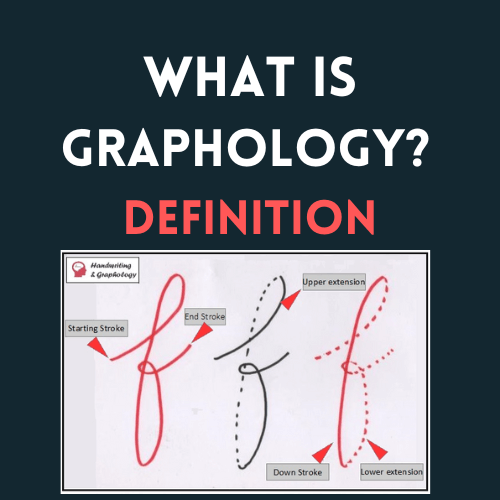